It took a while to fix all the bugs of the very first public release of the prototype, but once that was sorted work continued forward. And now here's:

There now exists a bunch of pre-defined bonuses in the game. Each bonus can have their value increased by race, faction, artifacts and technology. Technologies are activated by knowledge. Knowledge is generated in the library. 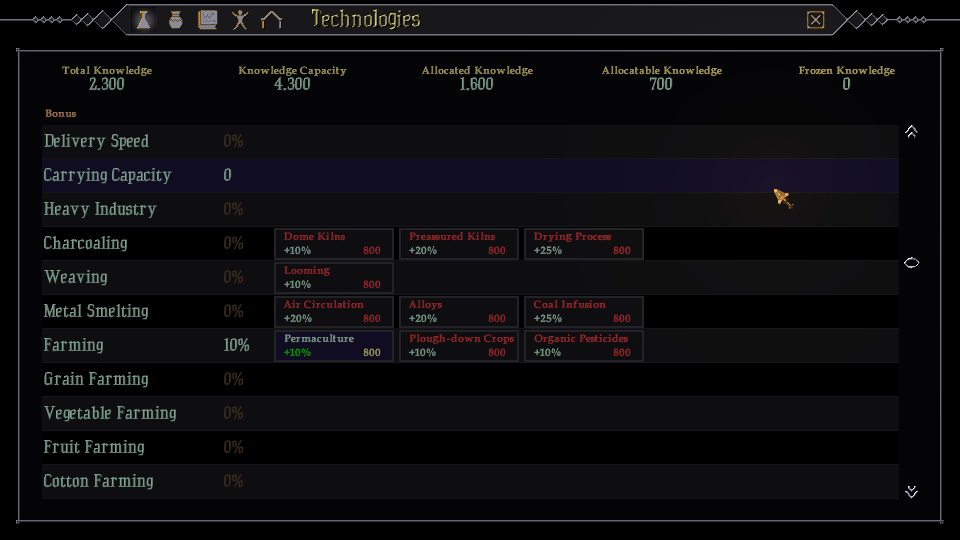 Libraries might work a bit strange, but once you get into it, I think it will feel quite intuitive. They start completely empty and once your subjects start working they'll produce knowledge in the form of books.  But books also deteriorate with time at a certain rate, meaning the more knowledge a library holds, the more effort your scribes need to put into maintaining (copying) degrading books. So, a library with a full shelves will still need a full workforce, just for maintenance. Once you are low on technology you'll start to "forget" technologies. 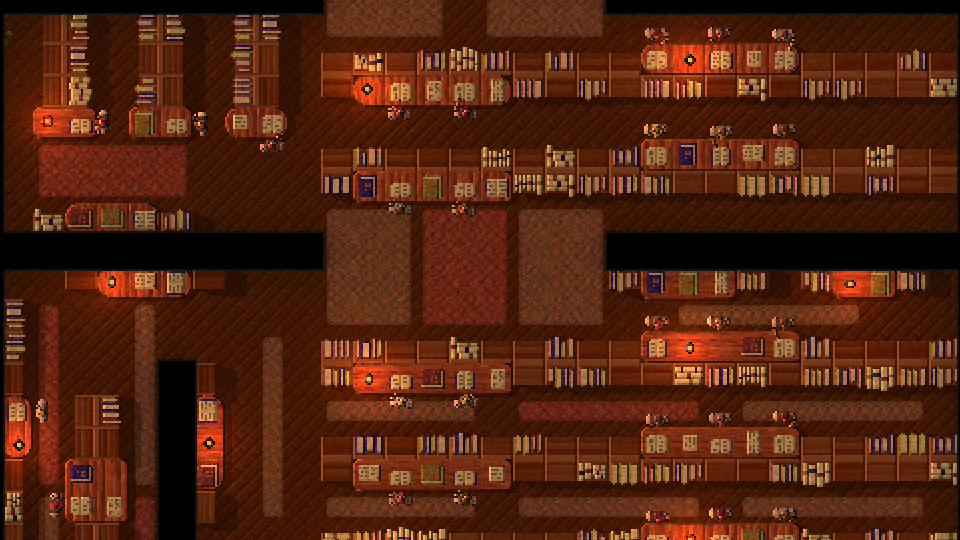 Technologies can be easily added, removed and altered for a modder. Take a look at Res/data/definitions/tech.txt

In SoS, city map generation is done using a 3x3 tile chunk from the world-map as reference. Generation is thus semi-random. If you ask me, this is harder that going fully random, since you need to control the randomness to not only resemble the world-map, but the result also needs to work - meaning entrance points and other things can not be blocked. I've re-written this code several times and thought it was time once more.

The result is a more interesting map, where one area looks different than an other with an attempt at creating recognizable landmarks, so that the map can be navigated more easily. I also added caves and rivers that branched and created islands. 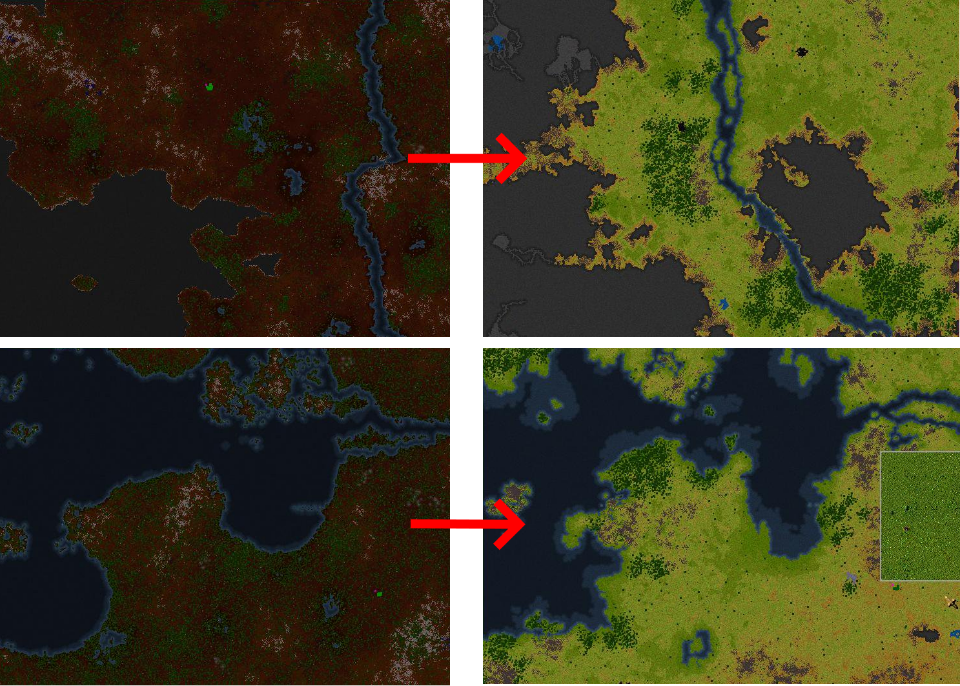 Furthermore, the aesthetics of stone and minerals have been improved, along with most other terrains. Resources have also been increased and the minimap got a different color scheme, to make it easier to spot resources and landmarks. Here's new (above) vs old (below).

This came at the cost of slightly longer load times, but I think it was worth it. 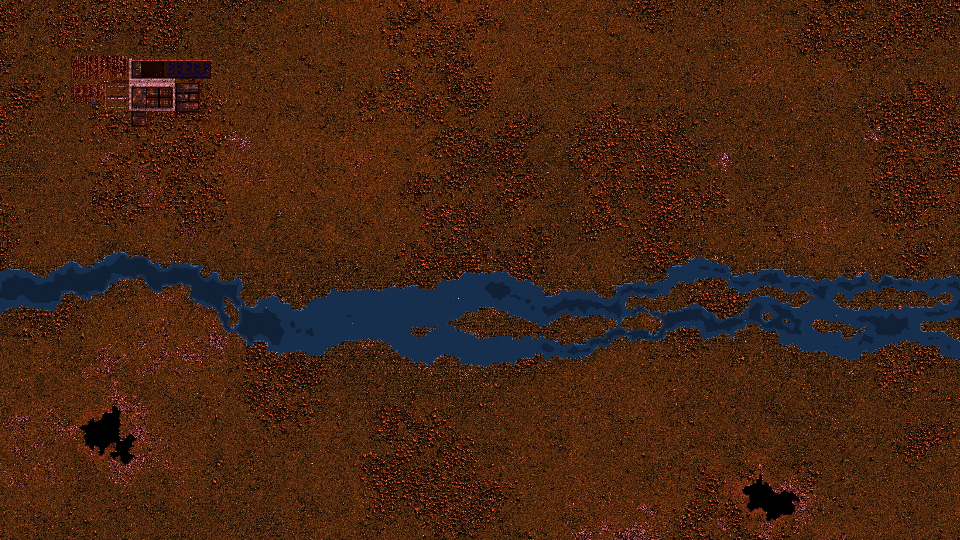 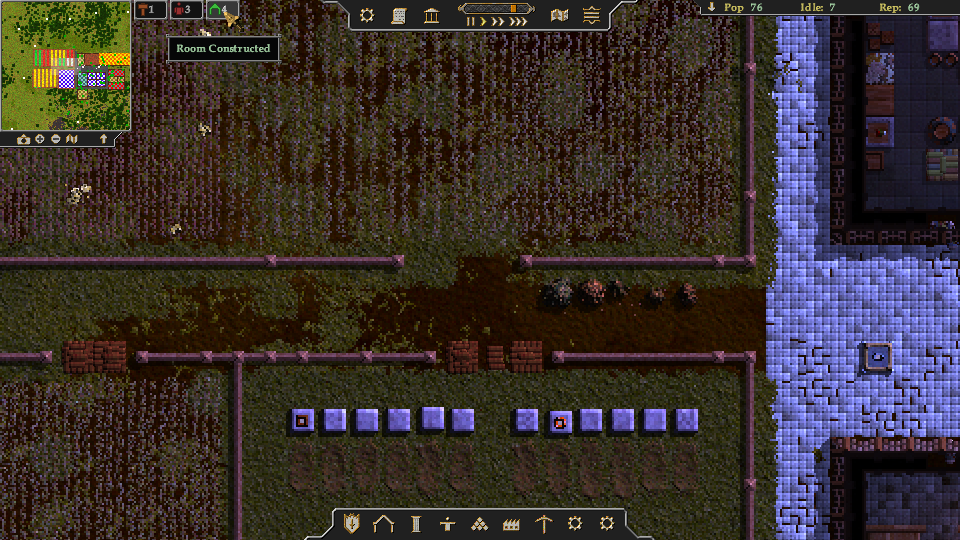 This is by no means complete, but the ground work has been layed and no more strings are hard-coded into the source code, but resides in .txt files in the res folder. To translate the game is now like creating a mod. Different char sets than English are currently not supported, but can be fixed in the future, making it possible to translate the game into all alphabets that can be expressed in UTF-8 (sorry 1b Chinese people). Hunting down all the remaining hard-coded strings is a job for another day.

Sadly, I'm fairly certain there will be no support for alphabets which are expressed with more than 255 characters, like Chinese, Japanese and such. This is because fonts need to be drawn manually in SoS and go through my own internal 6-year-old, system where more than 255 different characters were unthinkable at the time.

As a side effect here's a lot more files in data/definitions that can now be modded. Both numbers and text.

A bunch of new goals has been added and instead of climbing up these goals, they now all work in unison. Each goal can typically take on the value 1.0-2.0 and the product of all these constitutes your reputation. ATM, your reputation means how many people you can attract to your city. The actual spawn rate has also been slowed down, where it can take up to a minute for an immigrant to spawn (60s / queued Immigrants). You can still drown in immigrants if you're not careful, but if you take it slow, there will be no more sudden surges and hopefully, those that have suffered from over-population will have an easier time. 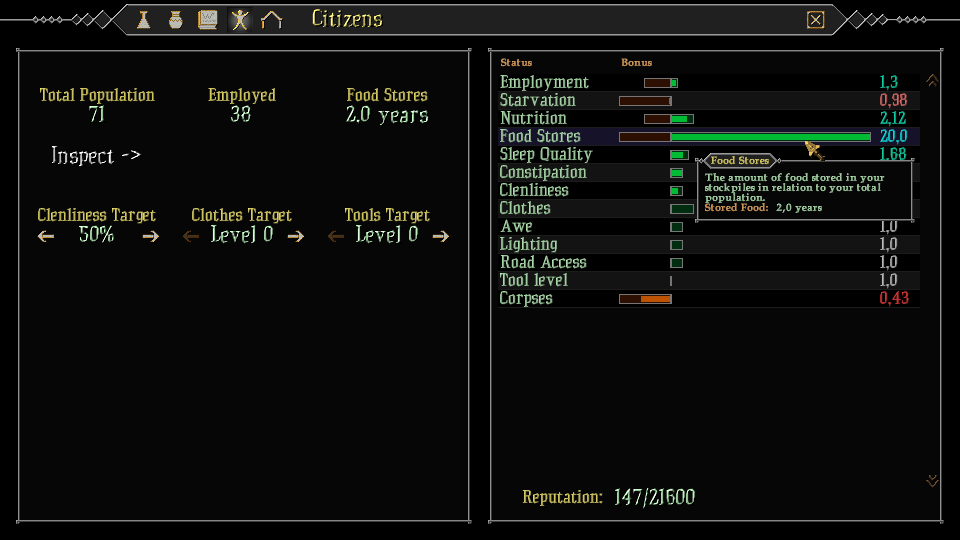 Subjects will now take note of your placement of monuments and lights. If they're walking past them, they will feel awe and feel comforted. Place torches and monuments along your roads and the hot-spots of your city in order to increase your reputation.  When placing these a heat-map will be visible. It goes from yellow to green, showing you how much awe/light there is on each tile. 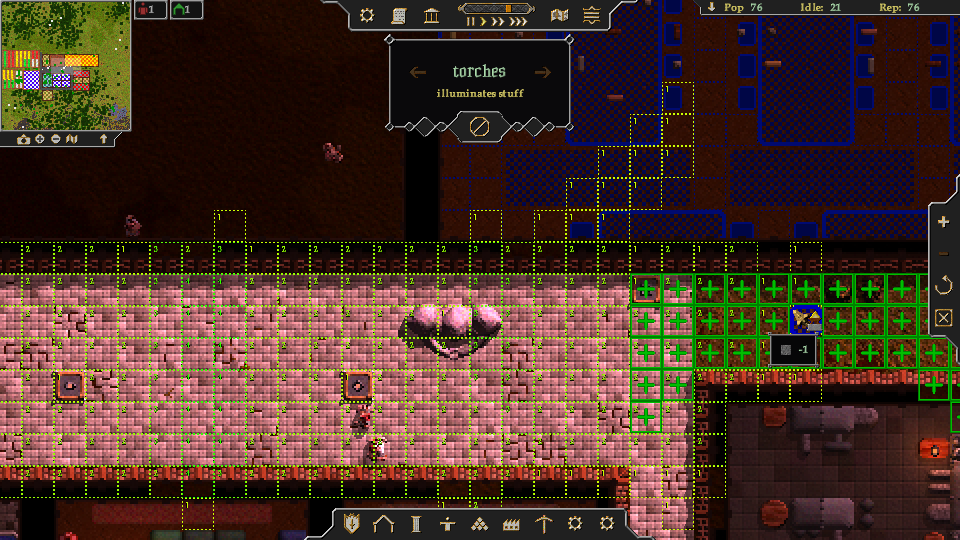 Subjects now react to your roads. Not only do roads now increase movement speed (as other form of terrain can decrease it), but subjects also appreciate the fact they're walking on roads. Subjects also create dirt roads when walking over vegetation over time. Subjects will only try to walk on roads to a certain degree. So a new wall - the fence - has been added. A fence cost 1 wood and can be used as a barrier for your subjects and to force them to use roads and walk close to your lights and monuments. 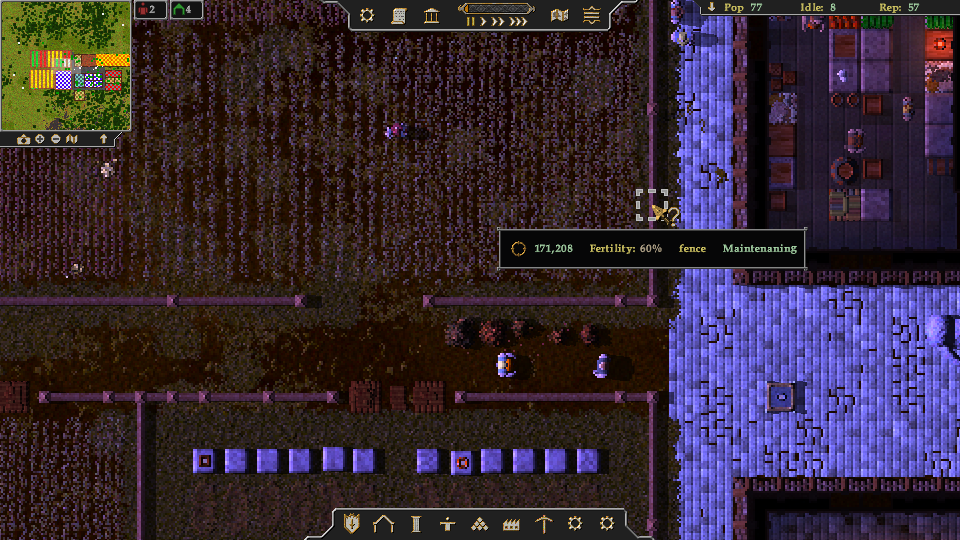 I tried to draw a dirt road, but failed. Also, all roads now give the same value. SoS is supposed to have 2 tiers of roads. Stone and fine Stone. Fine stone is made out of cut stone. A resource that is produced at a non-existing mason, so we will just leave it at this for the time being.

Rooms, constructed or still in the construction phase, can now be copied, rotated and pasted.

Farms have been given an extensive overhaul for some reason. Their yield is now calculated correctly. Their ascetics are slightly improved including the UI.  Gracing animals can eat your crops, so make good use of your new fence and hunter outposts. 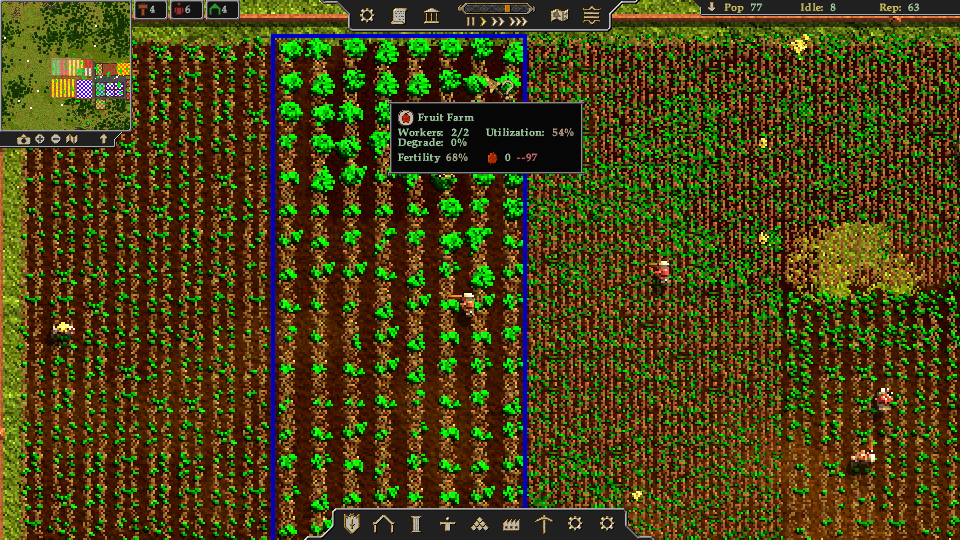 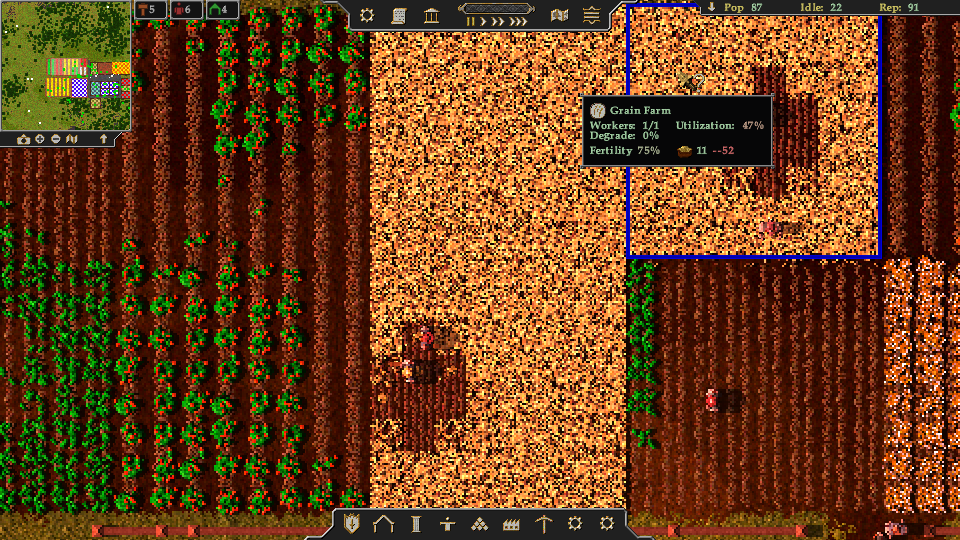 There's also a lot more that I've forgot about. The game is now on steam as well in case you've missed it, so go over there and wish-list if you haven't already! The work in this update has been heavily influenced by players on the discord and I'd like to thank them all.

SoS is also in dire need of more fans and hype, so if you have any idea on how to fix this, let me know. Also, don't forget to follow on twitter, join the discord and sign up to the newsletter at www.songsofsyx.com 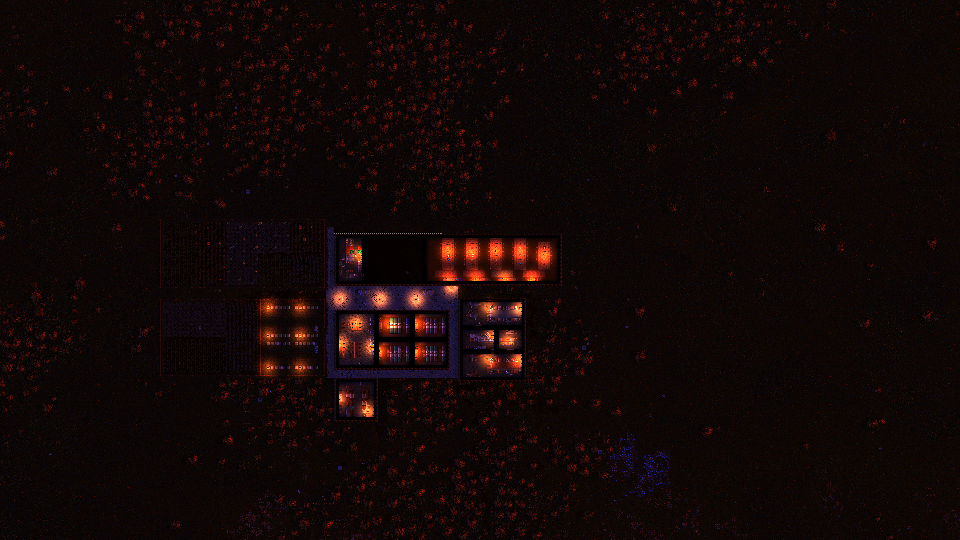 How do I get to the islands?

tried to play, downloaded the version and when i opened the "syxproto" only stay with black screen, i can hear when the mouse pass through menu but all stay black

Reply
Jake the Dondorian3 years ago

Yes, I've had a few reports of this, all when running on windows 7. I can not reproduce the issue on any of my platforms thought, so can't fix it. Yet. When possible, I'll get a windows 7 copy and look into it.

hi, tried to run again and it works fine, i don't know if was my laptop but i just update my open gl of amd to 4.3 and it works, just make that on my laptop